There have been dozens and dozens or contributors to the project of creating the world's most advanced sailing education and certification program. Listed here is a world class sailing academy group. These are sailors and academics combined to create the best of the best.

Originally from New Zealand, Grant Headifen has more than 20 years of boating experience. As a captain, he has logged many of miles on voyages around the world. He has led dozens of sailing adventures through the Caribbean, Mediterranean, Sea of Cortez and South Pacific.

In 2001 Grant founded the Sail Time company and grew it into 30 franchises worldwide. He sold out in 2007 at the height of the boom years. Grant was then asked by many to apply his internet, sailing and marketing skills to reinvent sailing education. Seeing the opportunity, he assembled the sailing academy team, a bunch of programmers and designers and launched NauticEd late in 2007.

Grant contributes to the NauticEd Blog Site which is loaded with sailing tips, and free sailing education. He reviews all the NauticEd courses and applies his passion and practical knowledge as a Certified Instructor and USCG 50 Ton Master Mariner to the theory courses. He is also the brains behind the technology of the online testing function of NauticEd and the NauticEd boat sharing software.

The Navigation Rules, Basic Sail Trim and Maneuvering Under Power Sailing Clinic's have all been written by Grant as well as coauthoring the Catamaran Sailing Confidence, British Virgin Islands Fast Check out Chart Briefing and Bareboat Charter Clinics.

You can meet Grant at many of the sailboat shows he attends worldwide, on his Beneteau 373 on Lake Travis in Austin, Texas or somewhere in the Caribbean, Pacific or Mediterranean and on occasions zipping around the Hauraki Gulf on his windsurfer in New Zealand.

Read Grant's latest kids sailing ebook about a boy, Alex who's dinghy comes alive and teaches Alex how to sail a dinghy. 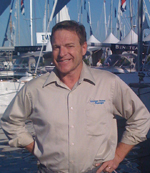 Ed Mapes is a Licensed USCG Master Mariner and founder of Voyager Ocean Passages where he provided instructional offshore sailing voyages on which more than 200 sailors learned ocean sailing.  His vast experience in sailing education comes from offshore yacht deliveries, racing, sail training, and cruising on which he’s amassed over 97,000 miles on the water.  Ed also provides offshore sailing and cruising seminars at events and major boat shows throughout the country.  Ed is one of only a handful of sailing instructors certified to train students in the most advanced levels of Celestial Navigation and Offshore Passage making, Ed has instructed at all levels of sailing education courses.  He also provides voyage planning consultations to assist those preparing for their own voyages and cruising.   Ed has published the books, Ready to Sail and Further Offshore, and his latest book, Safer Offshore, has just been released.  Ed has contributed articles to Sail, Practical Sailor, Latitudes and Attitudes, and he is a Contributing Editor at Sailing magazine.


Captain Mapes has provided the biggest contribution to the the NauticEd sailing academy group with his hand in most of the courses. He is also Dr. Mapes, a doctor of Veterinary Medicine.  He is head of the surgical department at Animal Medical Center of McKinney, Texas.

You can meet Captain Mapes at the many seminars he gives at sailboat shows and see his sailing education web broadcasts courtesy of Seven Seas Cruising Association. Also, please enjoy Captain Mapes' books.

Daria and Alex Blackwell are lifelong sailors and passionate cruisers. They have completed three Atlantic crossings and have spent years cruising the coasts of the Americas and Europe, as well as the Bahamas, the Caribbean islands, and the Atlantic islands, most recently double-handing on their vintage 57-foot ketch, Aleria. Alex holds a USCG Master’s license with sailing and towing endorsements.  Daria holds a USCG OUPV Captain’s license. The Blackwells are members of the Seven Seas Cruising Association, American Yacht Club, Mayo Sailing Club, and the Irish Cruising Club. They are also the organizers of the SSCA cruising station for Ireland.

Daria and Alex are frequent authors writing about technology as well as their sailing adventures and contributing to Cruising World, Classic Boat, Latitudes & Attitudes Seafaring, Practical Boat Owner, Ireland Afloat, Offshore, Windcheck, and elsewhere.  For many years, they served as the webmasters for the website of American Yacht Club and launched the popular www.CoastalBoating.net, “The boaters’ resource for places to go and things to know”. As founders of Sail4Kids Make a Memory Cruise, the Blackwells were recognized with prestigious awards by both American Yacht Club and the International Society for Perpetuation of Cruelty to Racing Yachtsmen.

Sailing Education is certainly a passion of the Blackwells. They are coauthors of the popular book Happy Hooking - the Art of Anchoring, which has received excellent reviews in the sailing press. Their seminar on anchoring has drawn large crowds and delivered exceptional attendee critiques and comments (Reference: SailAmerica, GLCC School and SSCA University).

Nick was the North American Manager for Lagoon Catamarans. He co-wrote the Catamaran Sailing Confidence Course with Captain Grant Headifen. His vast experience with sailing and selling catamarans led him to be the perfect candidant to join the NauticEd sailing academy team. He now has moved up in the ranks to join the Group Beneteau team in Europe.