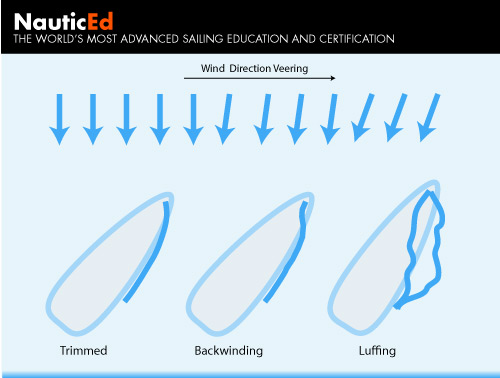 The luffing boat needs to bear away from the wind in order to keep the sails filled due to a wind direction change. This is called a knock i.e. they are knocked down wind away from their desired upwind heading or destination. Conversely - a boat on the opposite tack can take advantage of this wind direction change to be able to head up more towards their upwind destination. This is called a "lift. Thus when sailing to a windward mark, a "knock" in one direction is an advantageous "lift" in the other direction. Many times then, it is a good idea to tack your boat if you experience a knock but keep in mind that the knock may be temporary. Each time you tack, you lose a little time and so chasing the wind can cost you a race. Watch instead the heading of other boats ahead of you to see if the lift/knock holds. As you get really good at sail trim however, there won't be any sailboats ahead of you.

These are technical names for how the direction of the wind is changing.

A veering wind means it is changing to a new direction that is clockwise from it's current direction. For example if the wind was out of the North-East and changed now to come out of the East, then by definition the wind would have "veered".