We couldn't resist adding this section in. It's stuff that I did in my aerodynamics classes at University and it will help you really understand sail dynamics. And it's highly relevant right now because of the America's Cup AC45 catamarans using winged sails.

Observe Figure 5.1 below, the diagram on the left shows a traditional fabric sail. There are two forces produced. The first is the drag force due to inefficiencies of the sail and friction etc. Observe that when going in upwind angles you want to reduce the drag force as much as possible because there is no component of the force direction that is helping the boat move forward through the water. The second force is the aerodynamic lift due to the shape of the sail. The two forces can be represented by a resultant force that is acting on the sail.

You can see that reducing the drag is a highly significant factor. With fabric sails in everyday sailing we can get to the least point of drag by ensuring the sails are never over trimmed. Over trimmed sails means the air molecules are hitting on the inside surface of the sail pushing it backwards (= drag). Therefore, let the sails out until the point where they just start to backwind at the luff then tighten just enough to remove the back winding. This will be the least point of drag. In the same instance - observe that by reducing the angle of attack, the resultant force moves forward along with the drag force. This again gives you the incentive to let the sail out as much as possible to the point just before it starts to back wind.

Now lets take a look at a highly efficient wing shape acting in place of the fabric sail:
The first thing you'll notice is that the angle of attack is much smaller. This is because of the efficiency of the wing shape and that the wing is not relying on the wind to create its shape. The shape is already predefined.

Next notice that the drag vector is less and because of the lessened angle of attack the direction of drag is not as far aft. Less drag again is due to the efficiency of the wing shape compared to any other shape. 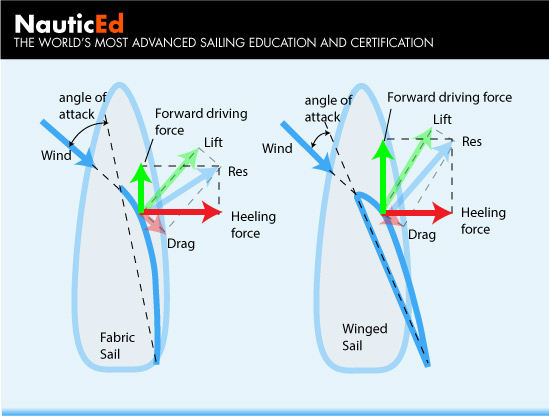 With downwind sailing directions some opposite things happen. The drag has a forward driving component. See Figure 5.3. 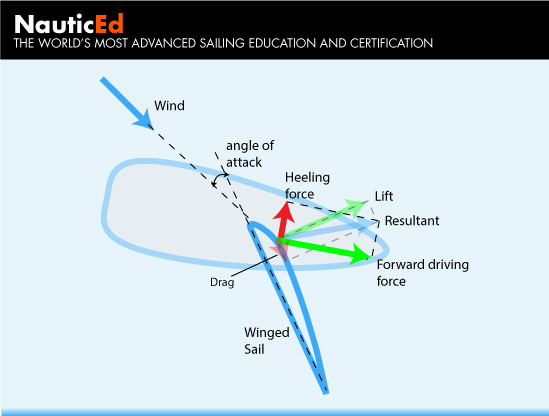 On the real winged sails the shape must be symmetrical to allow for the opposite tack. However the vector math and principles are the same.

With winged sails then, mathematically, there appears to be no downside. Practically we've got some issues:

So for now, these winged sails are left to the folks at the high end race regattas. However it maybe time to recognize the advantages of battened sails since you can now see that shape plays a bigger role than you may have thought. Battens are designed to aid the wind in giving shape to the sail. Thus battened sails are able to have a better angle of attack before luffing and therefore their lift and drag vectors are shifted forward. And the drag vector is reduced, helping to reduce heel at the same time. The downside of battens is the loss of convenience when it comes to roller furling systems although boom furling retains the advantage for the mainsail. Vertically aligned battens have been recently introduced in some sail systems to try to gain back some shape advantage.

I recently had the privilege of visiting Core Composites, the factory making these winged sails for the America's Cup 45 ft Catamarans, the AC45. It was a truly impressive operation. The carbon composite shapes brought back many memories of my Engineering Masters Degree in Composite Materials at the University of Texas at Austin.

We at NauticEd truly hope that you enjoyed this Basic Sail Trim Sailing Course. And we really hope we've built your trust for your future sailing education and Sailing Certifications. Please tell your friends about us. Thanks!

When you login to NauticEd sailing school and take our other Sailing Courses, you'll be building your sailing certification. The NauticEd Sailing Certifications are accepted by major international Yacht Charter Companies such as The Moorings, Sunsail, BVI Yacht Charters, Kiriacoulis, Sail TMM and more.

Visit our other sailing courses now.

Bye for now and as always have fun but be safe on the water.

If you loved this course please share using the tools below - thanks it really helps us grow and create more. 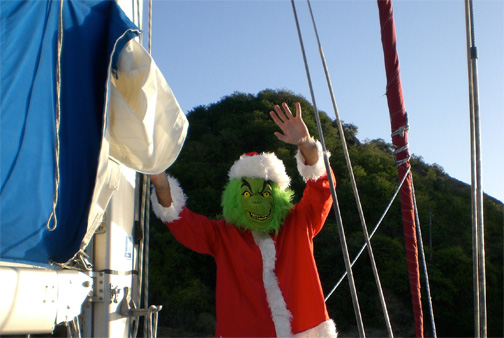