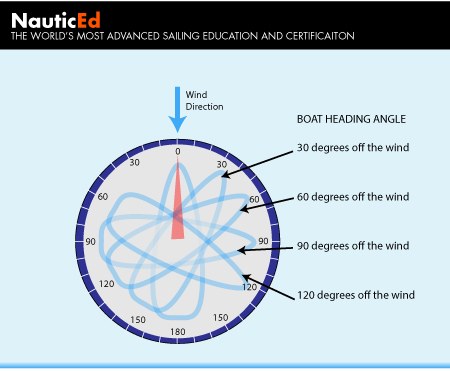 Some very hi-tech ultramodern (and expensive) sailboats like in the latest America's cup challengers use wings instead of sails. In the bonus Module 5 we'll discuss wing sails in more depth because it gives an in-depth knowledge of the forces at work. When you understand those forces you're getting the real hang of sail trim.

Sails, unlike wings, get their shape from the wind pressure against the fabric. After the shape is filled, then and only then does the lifting effect come to bear. Thus some efficiency of the shape is lost in creating the shape itself and so sails can't fly as close to the wind as a wing. About the best angle off the wind that most sailboats can achieve is 30 degrees. Any less than this and the wing shape of the sail begins to deflate. We have some control over the shape of the sail with halyards, sheets, outhauls, Cunninghams and fairleads etc. which we discuss in Modules 2, 3 and 4 and in more depth in our full sail trim clinic.

When the sail points too far into the wind it loses its shape formed by the wind and thus its lift. Liken to an airplane wing going completely flat during flight - we'd be doing more than spilling our coffee.

What we are doing then as sail trimmers is constantly imagining a point where the apparent wind is coming from, then flying the sail at its most efficient angle to that wind. We're making it act as best as possible like a wing - letting it out as much as we can to keep it flying but without collapsing the shape. This collapse begins at the leading edge of the sail. In Module 2 we'll discuss how to use the telltales to keep the sail trimmed.

What we do find with most sailing school students is that there is a tendency to trim the sails in rather than let them out. It's an common mistake which comes from not understanding the theory of lift and believing that the sails are pushed by the wind. While in downwind headings, sails ARE pushed by the wind, that is only due to rigging constraints. Module 5 discusses this.

Ok, so that's the basics - apparent wind, lift and smooth airflow. Module 2 gets a bit more tricky. The test for Module 1 and all other modules is inside this course in your Curriculum when you login. If you are not already logged in, do so now. If you don't have an account with NauticEd, you can set one up for free and this course is also FREE.